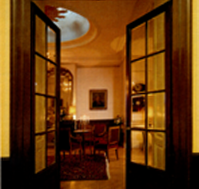 In 1767, a group of young men from Berne founded the shareholder company Hôtel de Musique. It is most likely the first shareholder company founded in Switzerland; certainly it is the oldest still existing today. The young pioneers built a beautiful building in the late baroque style in Berne with the aim to establish a Theatre- and Concert-Hall and to run it at a profit. The founders of the Hôtel de Musique were members of the "Great Society" - today "Le Cercle de la Grande Société de Berne".

La Grande Société of The Hague, which was established in 1748, served as a model for Le Cercle de la Grande Société de Berne. Among the first members of the Club in The Hague were twelve Bernese officers in the service of The Netherlands. Later some of them were among the founders of the sister club in Berne.

The art historian Norberto Gramaccini writes in a book for the 250th anniversary of Le Cercle de la Grande Société de Berne that the rooms of the club "represent some of the most beautiful interiors of the 18th century" (*).

Originally, the members of the private Gentlemen's Club were only of Bernese origin. Today the Club has more than three hundred members. They come from all parts of Switzerland, and some from abroad. 71 percent are Swiss German, 16 percent are from the French and Italian speaking parts of Switzerland and 13 percent are foreigners from some twenty different countries. Among them can be counted a few Ambassadors accredited in Berne. Out of respect for the French-speaking minority, French is cultivated in the Club. However, German, English and dialect are also spoken.

The bylaws, revised in 1995, describe the purpose of Le Cercle de la Grande Société de Berne as follows: "Since its foundation in 1759, the purpose of the Club has been to keep alive and further secular Bernese tradition. This tradition is based on respect for ethical and historical values and interest in public affairs. The Club offers its members a meeting place in the traditional style providing the possibility to cultivate connections, socially, intellectually and culturally on a national and international level." At the start of the 21st century this simple aim is still valid as a guiding program.